I have been busy this last couple of days, and so I only got a chance to post something today. Actually, I am supposed to be at the office right now, but I chose not to. I am tired already, and I need a break. So here I am now, in the comfort of my own home.

As I am chilling here and checking for some updates on my Facebook page, I decided to check other cool sites – YouTube, Yahoo updates, Blog posts of some famous people. And so, I come across Chico Garcia’s blog (yes, I follow his blog from time to time, and I like his morning radio show with Delle).

I was in awe when I saw his post about the YouTube version of We are the World. I thought it is very brilliant thing to come up with something like this. I mean, it is very hard, complicated, and genius for this thing to be possible. I kinda like the thought of technology being so powerful and amazing to almost everybody’s lives. I love it. Here, take a look.

Credits to Chico Garcia’s blog. Thanks!

I had a tough week (as usual), so I decided to unwind and do my weekend routine. I checked my Facebook, checked other persons’ profiles, searched some cool songs, browsed pictures and watched videos.

I really feel relaxed whenever I am watching something. Of course, it must be something of my interests – if not, I get more grumpy. Anyway, I found this amazing video in YouTube, and thought about if: “If this lady doing this finger- dancing- with-Thriller is a fan of MJ.” Well, I think she better be. She is very talented in doing MJ’s dance routines on that classic hit song – only, she is dancing it with nothing…but her fingers.

Here it is, I thought this is interesting so I am sharing it to y’all. Enjoy!

Two crappy weeks and (looks like) running. I am desperate. I am sick and tired of going through all of these things over…and again. You see, I don’t get it. I kept on doing my part, but someone is messing it all up. My plans never (as in NEVER) went as it should be. Because of that, what else could I do? – Well, stare at a blank sheet of paper, and find words on how to blurt out all he bitterness I have in my hopeless life.

Yes, maybe no one understands me every time I am sobbing over this lame thing – a thing that most of my age making it also their issue. To some, they thought that this is just a phase in life and should not be given an over-actingly attention and reaction. Well, let me tell you this: If you know you are considered a member of any social minority, and you can not also be good at anything…you must know that your future will not be dead – just doomed.

Acceptance is a big issue for me. That is mainly because I know that I am a minority. No one’s ever going to understand, accept and look at me normally if I won’t be good at anything. I can assure you of that. Accept the fact that people are naturally judgmental, until you prove them wrong.

Most people say that I am still young to achieve my dreams. I say: How come there are some people out there who already reached their goals at this “young” age? My bottom-line is this: if some people managed to do it, why can’t I? In addition, it is also very depressing to know that a lot of people are in a place where they shouldn’t be in.

Time is running out for me. And the clock is ticking fast. 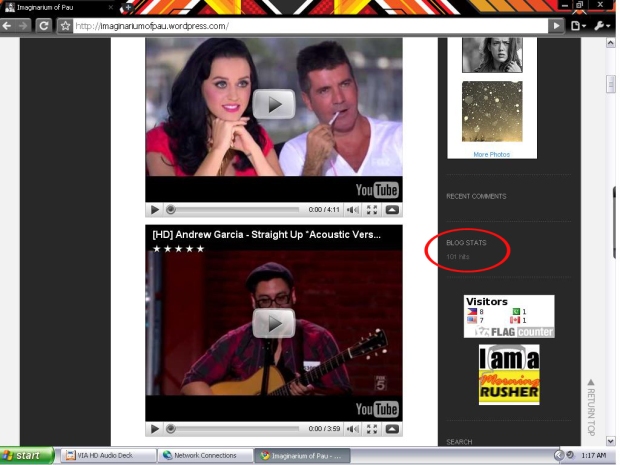 That’s it. peace out, guys.

After 8 seasons of American Idol (AI), I am starting to get hooked to the said TV show just now. And when I say hooked, everything stops when that guitar sound and AI logo comes in.

My addiction started during the last 6 or 7 episodes of last year’s AI. I am a Lambert fan. For me it’s quite obvious that Lambert can truly sing more than Allen. No offense to the Allen fans, but come on,  if we talk about voice range, Lambert is the killer. I admit, I was pretty shocked when Allen won the title of American Idol Season 8 Winner. Again…No offense.

This season, I am really looking forward to watch all the AI episodes. So far, everything is doing well for me. I have never missed any episode yet. Thanks to replays. It is quite weird and amazing all together though when I realized that as early as now, I already have my bet.

Andrew Garcia – A father looking for something big to happen in the competition to support his family. This man has mad vocals. I mean from all the contestants, he shines most. He is a genius in arranging his songs, and he can really really sing well. His voice and style is edgy and unique – and that what makes him up there. Let me show you how he does that.

For me, that is the vocals that could make the next American Idol winner. Keep up the good work brother. Keep on reaching the top spot.

Ever since I watched Pinoy Big Brother (PBB), I have never voted on the show’s text polls. I find it sayang sa load. Yes, I know. I am kuripot, makunat or thrifty. But this season, I am proud to say that I finally voted for the righteous big winner, at least for me.

My vote went to Paul Jake (go Paul Jake! For the win!). I like him to be the big winner because I find him the most responsible, smart, reasonable, cool and hard-working housemate. I liked the fact that he remained loyal to his girlfriend outside, and that he did not use anybody to gain that certain fame of winning the big price.

Last Tuesday (I am not sure, I am losing my body clock again) PBB revealed the votes standing of the Big 5. Honestly, I did not expect that Paul Jake owned the highest percentage, because of the fact that the Melason tandem is there. Well, as we all know, Filipinos always enjoys the romantic atmosphere a lot – so I thought that tandem has the highest votes. Surprisingly (and good thing), Filipinos forgot to attach themselves to that flashy couple and thought about who must earn the biggest pot money out there. What a great realization. Good job! Hopefully, he will be the winner until the Big Night.

Just a side dish, I also like Papa Tibs. He is so hard-working and responsible, just like Paul Jake. I actually don’t get it when the housemates say that he is nagmamagaling (he knows a lot on things), while all he just did was to constructively criticize the wrong doings of others. And mind you guys, anybody could have mistakes – we are just humans, including Papa Tibs. At least Tibo spills out what he thinks is right, and what he thinks could help the housemates. Not like the other housemates who kept on sush-ing but have never significantly helped on the tasks. They are just there – wallflower. 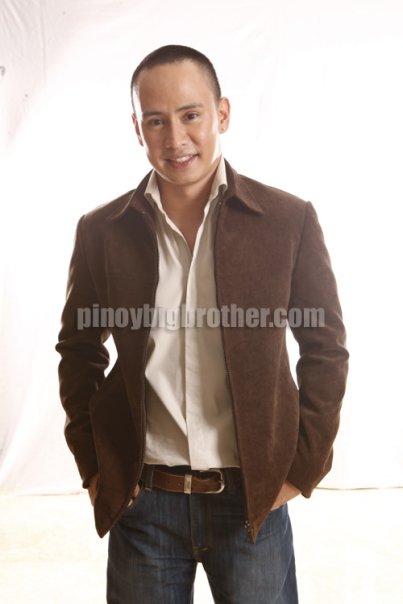 Anyway, these are just my thoughts. 2 nights to go before the Big Night. Lets cross our fingers, and hope that our pambato (bet) will get the title of The Big Winner.

Things got a little annoying and weird for me. So let me share some to you. No, I am not evil. I just found these videos interesting and funny. I swear, annoying is the perfect word to describe this talking fruit.

This is the quest of Annoying Orange.

Then he met his big brother Plumpkin…

And then an apple-like tomato…

By Christmas, he met Santa. I mean Sandy claus…

But somewhere in his journey, he met another annoying orange.

And the latest one he met so far is a football.

I hope you enjoyed watching the annoying orange as much as I did. All of these are made by daneboe. Cool man. Keep it up!

How much of the Philippines have you visited? Find out at Lakbayan!